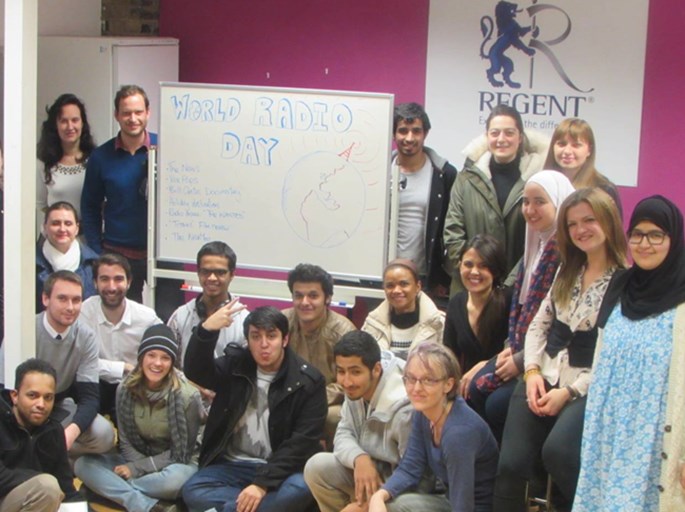 At Regent Cambridge we celebrated World Radio Day on 13th February. In the Knowledge for a Global Community class the topic was Media, and the students got busy writing and recording their very own radio shows. We helped them to focus particularly on pronunciation and clarity of speech.

In today's modern world we have so much technology for communicating with each other. There's the internet with social media and online videos such as You-tube and Skype, there's digital television on your mobile and iPad and countless downloadable podcasts. But did you know that in fact it's radio that reaches more people in more places across the world than any other medium?

With it being World Radio Day, we did some investigating into just how important radio is for communicating, and here's what we found:

Regent Cambridge has many ambitious students from all over the world and on World Radio Day they put their English language skills to good use by writing and recording their own magazine style radio show. The show can be downloaded here: https://soundcloud.com/regent-cambridge/regent-radio-world-radio-day-podcast

Regent language schools are a place where all nationalities come together - what better environment to celebrate World Radio Day.

Some tips to help you practise good pronunciation:

Mispronunciation is common, even with native English language speakers. We often get very similar sounding words confused, or pronounce words with tricky syllables and stresses in such a way that it changes the meaning completely! We've found an interesting list of words that are commonly mispronounced. Take a look, it might surprise you! http://www.huffingtonpost.com/2014/03/19/everyday-words-mispronoun_n_4986427.html